The site was a former sandstone quarry and subsequently a domestic landfill site in the 1980s. Capped in topsoil in 1994, gas was found to be migrating out of the site through the surrounding ground in 2005. A comprehensive gas management system was since installed to extract and flare the landfill gas. Consideration is now being given to permanently shutting down the active gas controls and replacing them with a passive system. Complete continuous monitoring data was collected to inform the decision-making process.

Three GasfluX™ units deployed onsite measuring bulk gases and flow rates over a two month period. Half-way through the project, the gas control system was switched off to understand the potential impact of doing this on a permanent basis.

When the gas control system was switched off, this was found to have a marginal effect on the gas migration around the site, proving that switching it off would have no major impact on the site.

Look at the graphs, the methane concentration shows that there is a correlation with atmospheric pressure. This could suggest that methane emissions increase in low atmospheric pressure. However, the GSV graph shows no significant correlation that would affect risk and therefore no increased emissions in low atm pressure. This allows the consultants to conclude that, on this site, time-series data of concentration alone (i.e. without measuring flow) can be misleading. 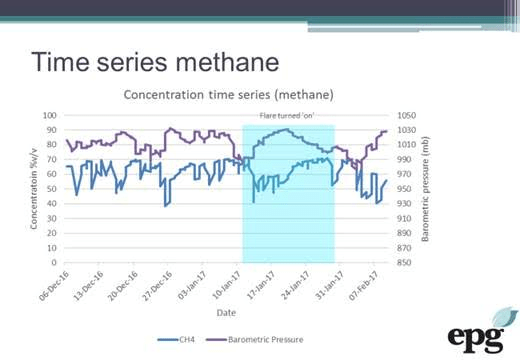 *Since this case study Ambisense has launched Ambiliytics, an environmental risk assessment platform that integrates data from any field-based IoT sensor, combining it with contextual data such as satellite and geophysical data, all on a single platform. Then machine learning generates statistical models, letting users get incredibly deep insights into their environmental data and make faster and better risk assessment decisions.

Get the latest environmental industry news straight to your inbox!